The store will not work correctly in the case when cookies are disabled.

story of those who value the little things 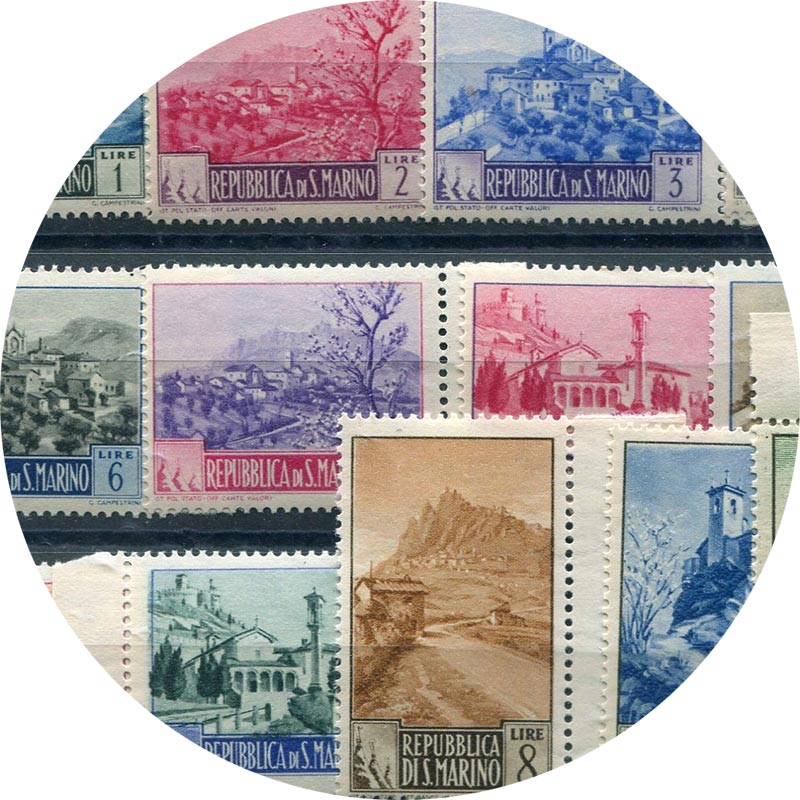 Philately in the Republic of San Marino

The postal history of the Republic has distant and illustrious origins. It begins with a provision adopted by the Prince and Sovereign Council on 7 October 1607, with which a Postiglione was appointed who was to go to Rimini with the task of collecting incoming mail and delivering outgoing mail, to guarantee the San Marino citizens contacts with the outside world. An organized public service was thus established both for the use of the state authorities and citizens: no one was exempt from payment, not even the Captains Regent, our Heads of State. It should be noted that at that time the function of transferring mail was carried out in every part of Europe by private couriers, the cost of which was within the reach of kings and popes; the less well-off had to fend for themselves, writes Franco Filanci, entrusting his message to a pilgrim, a monk, a ship captain…

A BIT OF HISTORY

San Marino was therefore the first state in the world to conceive and create a public postal service and without the aim of creating an income for the state coffers. So in the winter of 1607-1608 the first Postiglione, Giulio Franchini, began to shuttle between the Pianello (the square in front of the Palazzo Pubblico) and the Rimini post station; at the beginning once a week then two and even more, always on foot and in any season! To collect the mail leaving for Rimini, a box was installed under the portico of the Domus Communis Magna while, during transport, the correspondence was placed in a "bolgetta". And for over two centuries the Postiglione's salary consisted of a small salary - the cause of periodic complaints - supplemented by a baiocco as a fee for each incoming letter, plus a pair of shoes and an occasional cloak...

Philately in San Marino and in Italy

In 1862, following the stipulation of the friendship and good neighborly agreement with Italy, the Director of the Post Office felt obliged to indicate the place of origin on outgoing correspondence (as required by Italian postal legislation) finally introducing the "San Marino" stamp; it had no date, given that it was impressed with the Rimini calendar stamp. From 1 January 1863, with the entry into force of the Italian postal reform, which imposed advance franking, San Marino had to acquire Italian postage stamps, next to which the stamp expressing the origin (San Marino) had to be placed. They were then canceled, with a date stamp, a second time in Rimini; they are called "precursors" and have considerable quotation in the philatelic trade. The first Postal Convention between San Marino and the Kingdom of Italy was signed on February 7, 1865 and provided that "the Government of the Republic admits the use of Italian postage stamps in its territory for now", on which the Italian State granted a premium of 20 %; San Marino therefore had to adapt to Italian regulations and postal services but, Filanci writes again, it also did everything to differentiate itself: in the date stamp, although similar to the Italian ones, it put the wording in full "REPUBLIC OF SAN MARINO" and used the 'blue ink, the color of the San Marino flag – which instead the Italian postal legislation forbade because it is corrosive to stamps. 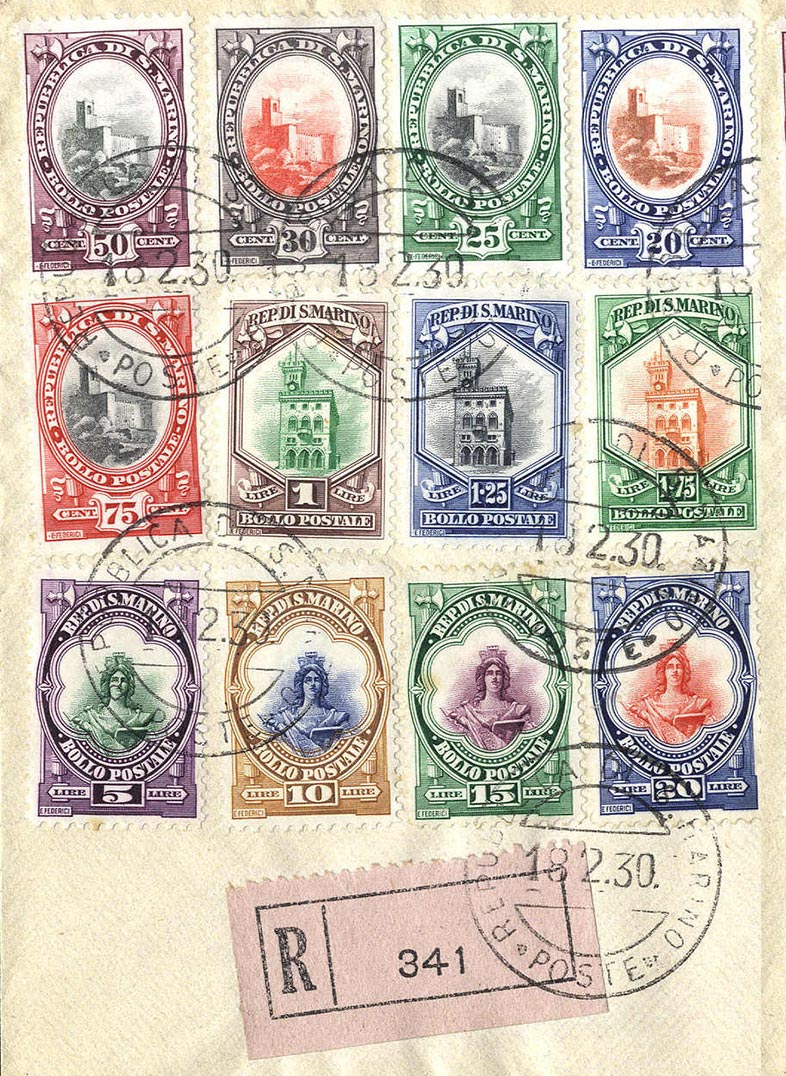 THE FIRST STAMPS OF SAN MARINO

A few years went by and in 1875 San Marino adopted the decision not to "continue to use postage stamps from another state in postal correspondence" and negotiations began with the Italian Officina Carte Valori to create its own. A new postal agreement of 2 March 1877 opened up an extremely favorable perspective for San Marino: it provided that the "postage of the Republic's correspondence for the Kingdom of Italy ... and the franking of the correspondence of the Kingdom of Italy for the Republic of San Marino, must be represented by the postage stamps in use in the respective State”. San Marino, Antonietta Bonelli wrote, essentially had decided to proceed with the issue and therefore with the use of its stamps and the decision responds both to the opportunity to fully enjoy one of the prerogatives deriving from the sovereignty of a State, and to the need to favor more and more certain sources of income for the extremely meager budget of the Republic”.

On 7 October 1607, a Postiglione was appointed who was to go to Rimini with the task of collecting incoming mail and delivering outgoing mail, to guarantee contacts with the outside world for the people of San Marino 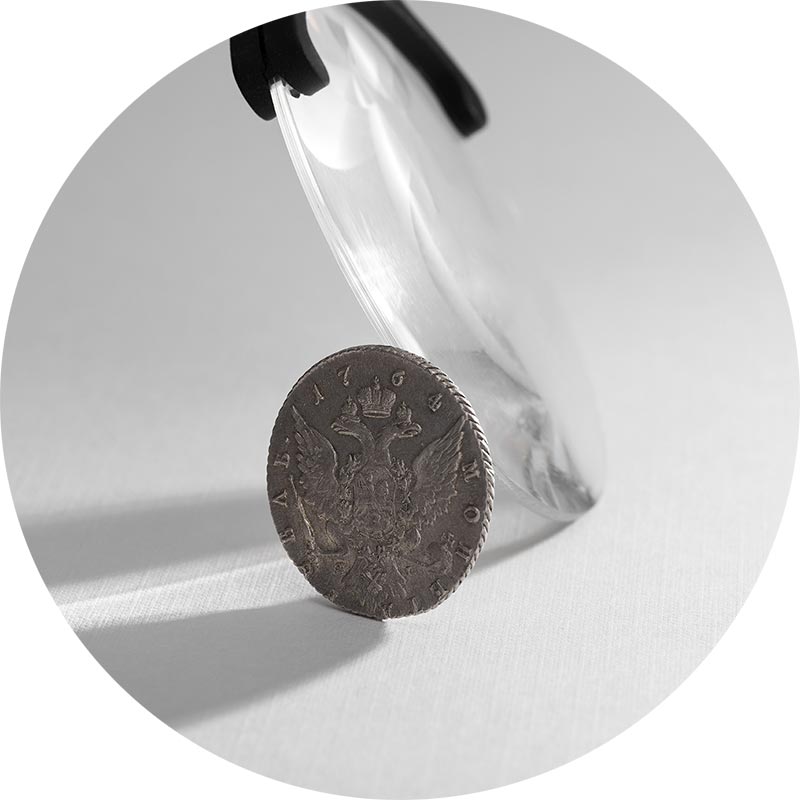 The history of San Marino numismatics

The smallness of the population and its territory never imposed on San Marino the need to establish a Mint; in fact, the convenience of setting up a mint with the relative services, technical means, availability of metals did not exist, the costs of which could be compensated by a monetary circulation and a banking system capable of supporting a San Marino currency. Nor was San Marino governed by a monarch or a gentleman who was driven by the ambition of handing down his head or the symbols of the family engraved on the coins to posterity. The proposal, put forward by some foreign "zecchieri" who "tried to come here to mint coins" was examined by the Prince and Sovereign Council but had no follow-up (Acts of the C.P.S. book 14 c.121 session 3.1.1608). It was discussed again almost two centuries later: in the minutes of the meeting of the Great and General Council of 28 October 1792 we read that "among the many means proposed to improve our free existence, the one of erecting a mint in the Republic was also motivated ..". The proposal was approved but then … abandoned.

THE FIRST AND ONLY MINT

The only "mint" operating for a very short time in the territory of San Marino was the one set up clandestinely in 1871 by a forger. The problem of "minting money" was tackled systematically in the context of the first Italian-San Marino Monetary Convention of 1862, which established in article 24 that "the coins that the Republic believed over time it would have to mint could have legal tender in the Kingdom, provided they correspond to the decimal system and have the same title and weight as the royal ones". The first copper coin, 5 cents, with the official coat of arms of the Republic (the three towers surmounted by a crown and surrounded by a laurel and an oak branch) was thus issued in 1864 by the Royal Mint of Milan. The first issue was followed by others at regular intervals (in 1898 the first silver coins) and in compliance with the clauses contained in the successive monetary agreements, up to that of 1939 with which the Republic of San Marino undertook "not to make any new minting of coins of any kind, except in the case of gold coins, and in this case the services of the royal mint will be used". The First World War and the economic crisis therefore temporarily put an end to the numismatic chapter which instead resumed in 1972 with divisional mintings having "...in the territory of the other, identical legal tender and liberating power in relations between private individuals and in those with public funds" (Article 3 of the Italian-San Marino monetary agreement of 10 September 1971). Since 1974, gold coinage has also resumed. There have been many series of coins from the first minting to today and the San Marino gold coin is still a staple of prestige, originality and autonomy even after the great event of the single European currency.

The advent of the euro

The Monetary Agreement, made in San Marino on 29 November 2000, between the Republic of San Marino and the Italian Republic, on behalf of the European Community, establishes that San Marino may issue euro coins, coin denominations and euro coins from 1 January 2002 collection in gold and silver, for the maximum annual value of 1,944 thousand euros. The euro coins issued by San Marino are identical to the euro coins issued by the Member States of the European Community which have adopted the euro, as regards the nominal value, the legal tender, the technical characteristics, the artistic characteristics of the common face and the common artistic characteristics of the national face. The artistic characteristics of the national face are communicated in advance by the Republic of San Marino to the competent community authorities. Every year, the Republic of San Marino communicates by and no later than 1 September, the nominal value of the euro coins, divided into coin sets and collector coins (in gold and silver) that it intends to issue during the following year. The maximum mintage quota is subject to a biennial review calculated on the basis of the ISTAT index of consumer price changes in the previous two years. It is a well-established tradition among enthusiasts from all over the world to collect San Marino philatelic and numismatic issues, also sought after by non-experts as a souvenir of great artistic value of a visit to the Republic.
The medals
San Marino medals, born in a subdued way almost in synchrony with the coinage of the Republic, while San Marino philately was still in incubation, has been widening over time, from 1932 onwards, its themes and the number of artists who have given their work for this purpose. 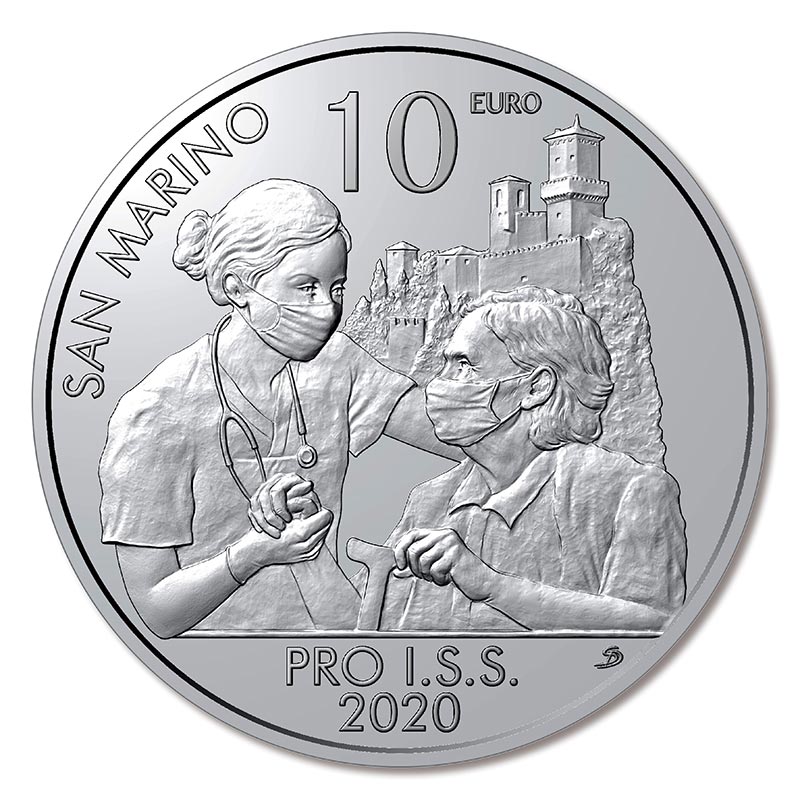